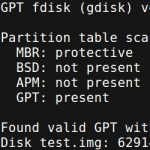 Good old Master Boot Record (MBR) unfortunately cannot address anything beyond 2TB, so partitioning large disks and making them bootable is impossible using MBR. The GUID Partition Table (GPT) solves this problem: It supports disks up to 16EB. However, installing grub does not work without a special BIOS boot partition. If you also want to support booting the same system via UEFI, another partition, the EFI System Partition (ESP), is necessary.

This should post shows you how to partition a disk with GPT and make a bootable Linux system via BIOS/Legacy and UEFI.

For this post, I’ll assume that you are running everything on a Debian-based system, and all commands shown must be run as root.

For this example, we’ll use a small Linux install that we can create with the following commands. This will bootstrap (debootstrap) a minimal Ubuntu 16.04 system to the chroot/ folder which we will later use to boot our system. To create a bootable system, we need a kernel and the bootloader modules and files, so let’s install linux-image-generic and grub-pc:

Bootstrapping a new Ubuntu 16.04 system (with a kernel and grub)
Shell

Alternatively, you can of course use any Linux root file system, provided that it has a kernel and grub. You could, for instance, just copy your own root file system to the chroot/ folder.

2. Creating a GPT with a BIOS boot partition and an EFI System Partition

Now that we have the Linux root file system in the chroot/ folder, we’ll create a sparse file that represents our disk. You may of course do all this with a proper HDD/SSD, i.e. with /dev/sdX, but for testing things using a raw disk file is much easier. The following snippet will create 3 partitions:

Once this is done, you can list the partitions with gdisk -l test.img:

After the partitions are created, the EFI and root partition need to be formatted:

Formatting the root partition and the EFI System Partition
Shell

Note that I named the root partition demoroot (the ext4 label). This will be important later in the Grub configuration.

Now that the partition to be used for our root file system is formatted, let’s copy our chroot/ directory to it and then install grub to the disk with grub-install. Because the disk is GPT formatted, grub will use the BIOS partition to install its core image:

After this, you should be able to boot the system via BIOS from the root GPT partition. I always do that via KVM like this:

After you’ve verified that you can boot via BIOS, let’s make sure that we can also boot on UEFI systems. We formatted the EFI partition earlier. All that’s remaining is to create/copy the bootx64.efi image file and a valid grub.cfg to it.

The Grub config file in the EFI partition grub.cfg is rather simple: It uses search --label demoroot to look for the root partition and then simply includes the actual grub config file via configfile ....

Let’s mount the EFI partition again, create the image and the grub config:

After that, the EFI partition should contain the two files /EFI/BOOT/bootx64.efi and /EFI/BOOT/grub.cfg. You can verify that like this:

That’s it. You should now be able to boot this image via UEFI. I always test this with KVM and OVMF:

Booting the image via UEFI/EFI
Shell

If you are an impatient man/woman, then you may just want to run the following script to do all of this in one go. You’ll of course have to adjust it to your needs for production use.

The script can be called in two ways:

Examples on how to use the mkbiosefi script
Shell