Image based upgrades: Upgrading software and OS of 80k servers every two weeks 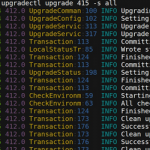 Image based upgrades: Upgrading software and OS of 80k servers every two weeks

Anyone that’s ever managed a few dozen or hundreds of physical servers knows how hard it can become to keep all of them up-to-date with security updates, or in general to keep them in sync with their configuration and state. Sysadmins typically solve this problem with Puppet, or Salt or by putting applications in a container. While those are great options if you control your environment, they are less applicable when you think about other cases (such as appliance/server that doesn’t reside in your infrastructure). On top of that, replacing the kernel, major distribution upgrades or any larger upgrades that require a reboot are not covered by these solutions.

Being faced with this problem for work, we started exploring alternative options and came up with something that has worked reliably for almost two years for a fleet of now over 80,000 devices. In this blog post, I’d like to talk about how we solved this problem using images, loop devices and lots of Grub-magic. If you’d like to know more, keep reading.

1. Debian packages all the way?

Our BCDR appliance has always been Ubuntu-based, so the natural way to update our software was through Debian packages. That’s what we did for a long time: every two weeks, we’d build releases for Ubuntu 10.04/12.04 (yes, we know, read on!) and after thoroughly testing them, we’d ship those to the fleet.

That worked for a long time, but it had some significant drawbacks:

That is by no means a complete list of problems, but I don’t want to bore you with even more problems. Let’s get to the fun part: How to solve it!

With all these problems it’s pretty obvious that we needed something better. We needed to manage the state and configuration for our devices. It was important to minimize the number of different device configurations/packages/versions in the fleet, and to ensure that with every upgrade, we’d be able to upgrade the entire stack — be it our own software, third party software, or even system libraries such as libc or the kernel.

We started defining our requirements for a solution, and they were actually pretty short:

The strongest implication of these requirements is of course that we were going to drop package based upgrades, and — if you can read between the lines — that rebooting an appliance as part of the upgrade process is acceptable.

Both of these are a pretty big deal. Big decisions were being made!

To be able to reduce the number of configurations, we decided that we wanted to stop treating our software and all its dependencies as separate pieces. Instead, we wanted to combine them all into a single deliverable — an image.

So what’s an image? An image (in our world) is an ext4 file system that contains everything needed to boot and run a BCDR appliance. That includes: 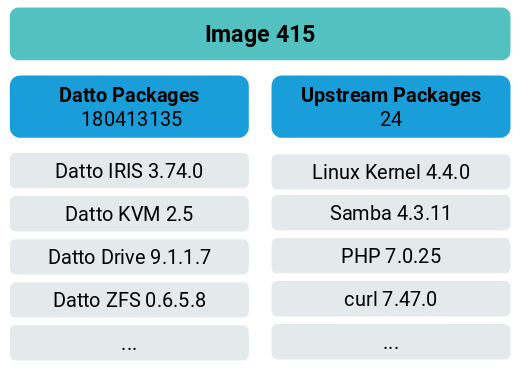 We were excited about this idea because with images there is exactly one number, the image version (415 in the picture above), that defines the version of every piece of software that is installed. No more testing our software with multiple ZFS versions, no more hoping that it’ll work with all KVM versions. Yey!

After making all of these important decisions, we still needed to find a way to build, distribute and boot these images on our devices. So let’s dive into these topics.

We typically build an image automatically every time we tag a new release (or release candidate): Every time we push a tag in Git, a CI worker starts the image build process. The build process itself is pretty interesting, but a little out of scope for this post. But I don’t want to leave you hanging so here is the short version:

We first build Debian packages of our own software and publish that to a Debian repository. We snapshot the Debian repository using aptly, and we do the same regularly with an upstream Ubuntu repository (“Upstream packages”). We then we use debootstrap to create a base Ubuntu system and install our software with all its dependencies in a chroot. Once that’s done, we tar it up and rsync it to our image server. On there, we extract the tarball and rsync it over the last image, which resides in a ZFS volume (zvol) formatted as ext4. After we zero out unused ext4 blocks, we finally snapshot the zvol containing the file system.

Here’s what that looks like on the image server:

That zvol now contains the ext4 file system of our BCDR appliance. That is the image. That’s our single deliverable. It can be tested as one unit and once it passes QA it can be distributed to our customers’ BCDR devices.

Great, now we’ve successfully built an image. How do we get it from our data centers to the >80k devices? Pretty simple: We use ZFS send/recv!

Our devices all have ZFS pools anyway to store their image based backups, and we already heavily use ZFS send/recv to offsite their backups. So using this technology in reverse was a no-brainer.

So here’s what we do: When it’s time to upgrade, we instruct a device to download a ZFS sendfile diff over HTTPS (we’d use ZFS send/recv over SSH directly but that cannot be cached unfortunately):

As you can see in the screenshot, we typically don’t have to download the full image, because the devices have upgraded before and already have a version of the image in their local pool. That’s pretty sweet: Using this technique, we can do differential operating system upgrades — meaning devices only have to download the changed blocks of the image.

That’s a win-win, because it means we don’t overuse our customers’ networks and we don’t have to provide lots of bandwidth for upgrades from our data centers.

Once the image is downloaded, we import it to the local ZFS pool. This is particularly important for the next upgrade (to ensure we can download diffs):

Now that we have the image, how do we boot into that file system? And if every image version we build is a completely fresh OS, how do we go from one version to the next?

Not surprisingly, there is more than one answer to these questions. There are many ways to use the image to produce a bootable system, so we had to experiment a little bit to find the best one.

Given that they are quite interesting, I thought I’d briefly mention them and why we didn’t end up doing them:

After trying so many different ways of booting into an image, what we ended up doing almost sounds a bit boring. But boring is good, right?

The simplest and most reliable way we found to boot into an image was to leverage Grub’s loopback booting mechanism, combined with the loop support in initramfs (see loop=... parameter):

Grub, as you most certainly know, is a boot loader. Its responsibility is to load the initial RAM disk and the kernel. For this purpose, Grub has built-in read support for many file systems and as we will see shortly also for file systems within file systems via the loopback command. The loopback command will find an image file on the root partition and loop it, so that the linux and initrd command can be used like normal to find the kernel and RAM disk. Here’s one of the menu entries we generate (via a hook in /etc/grub.d) for our device’s grub.cfg files:

In this example, Grub will first find the root partition (just like on a normal Ubuntu installation) by its UUID via search. It will then discover the image file /images/415.0.img on that root partition and finally find the kernel ((loop)/vmlinuz) and RAM disk ((loop)/initrd.img) inside the image.

It’s incredibly simple, but really also incredibly cool: The fact that a boot loader can do all that still amazes me.

Once Grub found the kernel and the initial RAM disk, it loads the RAM disk into memory (shocker!), which is then responsible for mounting the root file system before handing control over to the init process.

In Ubuntu, the initramfs-tools package provides utilities to create and modify the initial RAM disk. Luckily it already supports loopback booting, so typically there isn’t really much more to do besides passing a loop= parameter in the kernel line. If that is set, initramfs will loop-mount the root file system to the image via mount -o loop (see source code). Given that there is a pretty scary FIXME message in the code (# FIXME This has no error checking), we thought it’d be good to make that a little more resilient by adding error handling and fscking to it. In most cases, it should boot without messing with initramfs though.

That’s really it. A lot of words for such a simple solution.

Here’s what it looks like in practice. As you can see, this device’s root file system lives on /dev/loop0. This loop device was set up in initramfs and it points to the image file:

So now we can build, distribute and boot images. If we combine these things, you can already see that upgrading from one image to the next is not hard:

And that’s pretty much what we do. We wrote a tool called upgradectl for that:

upgradectl is typically triggered remotely by our checkin process: It prepares the upgrade in the background during normal device operation by downloading and exporting the image (step 1). And when it’s finally time to upgrade (usually at night when the device is idle), the actual upgrade process will be blazingly fast, because it only has to migrate configuration, update Grub and reboot (steps 2-4). Typically, the downtime for a device during an upgrade is about 5-10 minutes, depending on how long it takes to reboot (larger devices will take longer due to IPMI/BMC initialization).

Now of course there are tons and tons of gotchas and edge cases to consider: It sounds easy, but it’s really quite hard to get right — especially considering that our 80k existing appliances had been in production for up to 7 years.

That made for some fun challenges: We upgraded thousands of devices from Ubuntu 12.04 (and even 10.04) directly to Ubuntu 16.04. We implemented logic to deal with falling back to old images in case the upgrade failed for some reason or the next. We dealt with full OS drives, faulty hardware (disks, IPMI, RAM, …), RAIDed OS drives and Grub’s inability to write to them, ZFS pool corruption, hung Linux processes (good old D state), stuck reboots, and many many more.

But guess what: It was worth it. It felt like spring cleaning after a winter that lasted 7 years. We brought devices into the best shape of their lives. And we’re still doing it. Every 2 weeks!

In this post, I showed you how we changed the deployment process for our BCDR appliance from Debian packages to images. I talked about how we build images, how we distribute them and how we use Grub’s loopback mechanism to boot them.

While I touched all the pieces to perform image based upgrades, the most exciting thing about all of it is this: Using this mechanism, we can move between kernels and even major operating system versions. We’re effectively booting into a completely fresh, new operating system every time we ship an upgrade. That means that the system won’t deteriorate over time, manual changes will be wiped out and that we could technically switch Linux distros in a heartbeat if we wanted to.

And all of this is done in the background, with no interaction of our customers, completely invisible to their eyes: 80k operating system upgrades every two weeks, how cool is that?