How-To: Move your existing Linux install to ZFS on Root 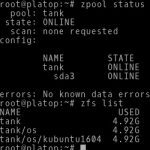 How-To: Move your existing Linux install to ZFS on Root

Ever since I joined Datto two years ago, ZFS has been part of my work every day. And every day, I am amazed how great it is. So naturally, I wanted to move my existing Linux Mint 18 installation to boot off of ZFS. Why, you may wonder? Well that’s easy. Because now I can snapshot my root file system, I can roll back if I need to, and I can restore individual files in a heartbeat.

It took a bit of fiddling in the beginning, but once you know how it works, it’s a piece of cake. This short post shows you how to move your existing Linux installation to ZFS on root (preferably Ubuntu 16.04+ based, may work for others).

For this example, we’re assuming that you’re running an Ubuntu 16.04+ based operating system (Ubuntu, Kubuntu, Xubuntu, Lubuntu, Linux Mint, …), and that you have another partition (to be used for the ZFS pool) with at least the amount of disk space that your current root partition has. If that is not the case, you can follow step 3 to make room.

In this example, I’ll be using a regular Kubuntu 16.04 installation. This could be your laptop or workstation, with any derivative of Ubuntu installed. 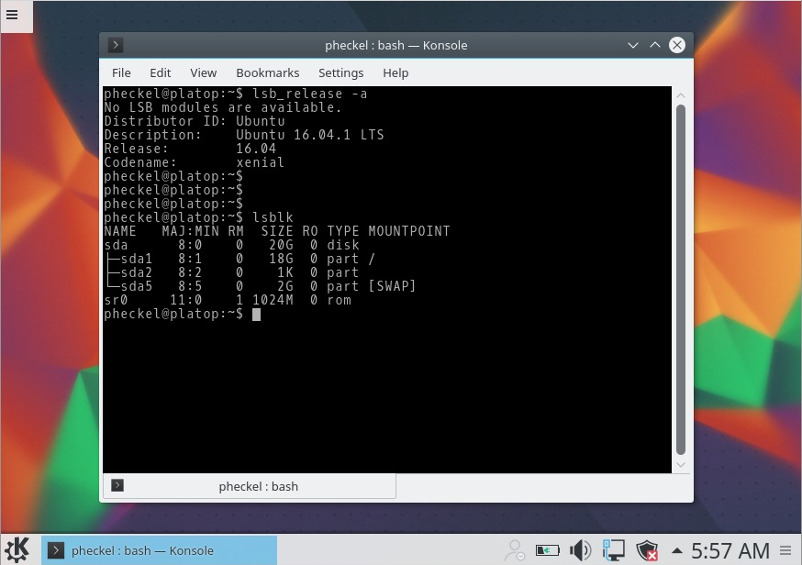 Optional (if you have no spare partition): As you can see in the screenshot above, lsblk shows us that the machine has no extra partition for a new ZFS pool (yet), so we’ll have to split the root partition to make room for the ZFS pool partition. If you already have a disk/partition that you want to use as a pool, you can skip this step.

To modify your root partition, you need to first boot an Ubuntu/Kubuntu/Mint Live CD/USB, so you can fiddle with the partition layout in gparted or the KDE Partition Manager. I have opted to boot into an Ubuntu Live CD (to make it clear that this is not your live system).

To split your root partition,

It should look something like this (if you’re using gparted): 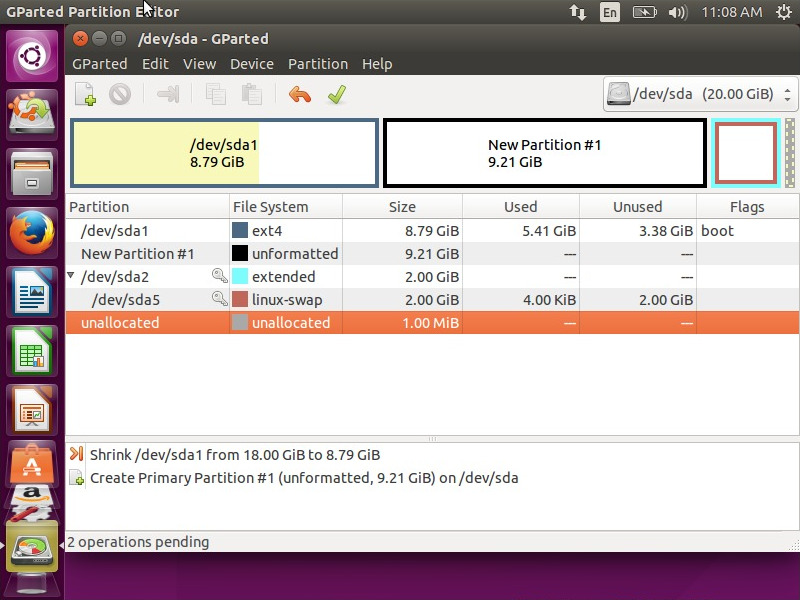 After you hit “Apply” and after you rebooted into your actual system, your disk layout changed and you have a new partition (here: /dev/sda3). This is the partition we will use to create the ZFS pool: 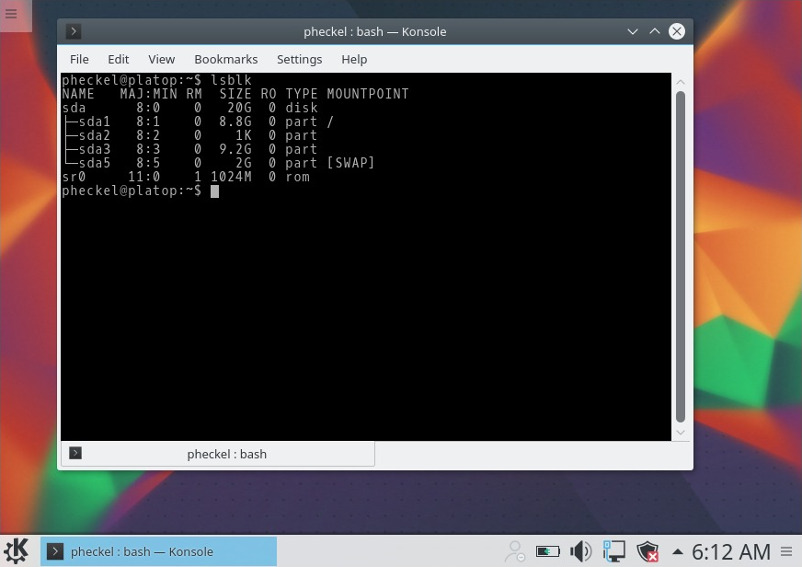 4. Creating the root ZFS pool, and copying your OS

Now that we have a free partition for our new pool, let’s first install ZFS (if you don’t have it already):

Install ZFS and its initramfs module

Then, identify the newly created partition and create the root pool:

Identifying the new partition with lsblk

Now create the root pool and the root dataset you want to use. I usually call my pools tank and put my systems in tank/os/<osname>, but this is really up to you:

Creating a pool and the ZFS datasets

After you created the new dataset, it is auto-mounted by ZFS at /tank/os/kubuntu1604. You may now start copying your running system to this location:

Copying the current system to the ZFS dataset

This may take a while, depending on your disk I/O speed and load; and it may even throw some warnings. Usually these warnings can be safely ignored if they are about files in /proc.

Now that we have the dataset of our new root file system (tank/os/kubuntu1604), we need to tell our bootloader (here: grub2) that it should boot into the new system. To do that, we need to chroot into the system and run update-grub and grub-install:

Chrooting into the new system, and updating grub

That’s it. During the reboot, if you press ESC, you can see that the grub menu will show the new system as “Ubuntu”, and the old system as “Ubuntu 16.04.1 LTS (16.04) on /dev/sda1”. That means if you’re having trouble with your ZFS on Root based system, you can always go back to your old system: 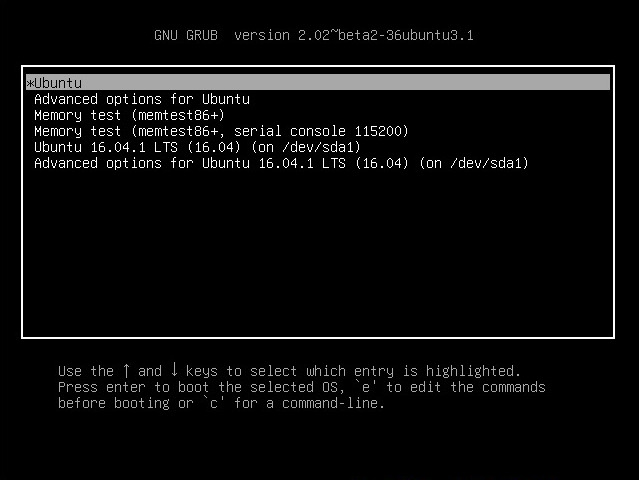 Once you booted, you can verify that you’re indeed running on ZFS with zfs list or mount: 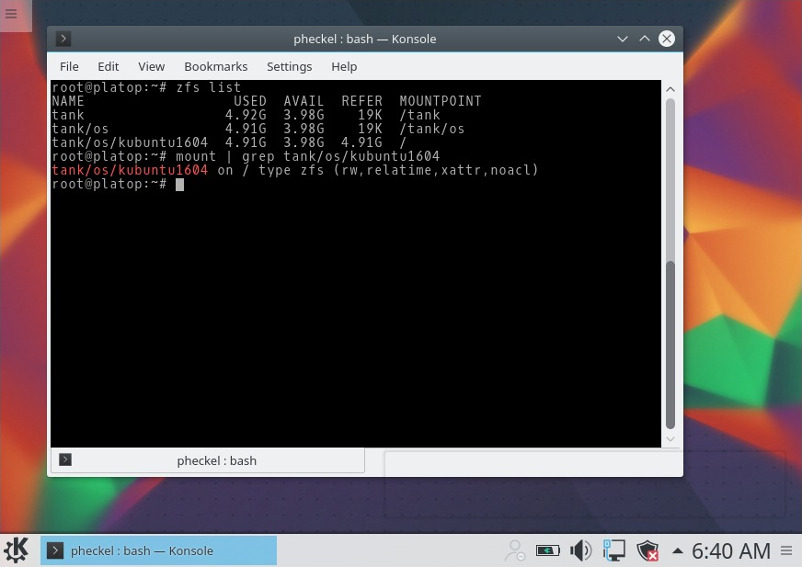 You can (and should) now snapshot your root file system, and you can even roll back if you really want to. The first thing you should do is set up a cronjob to regularly snapshot your system:

Once you’ve done that, you can always restore individual files by accessing the ZFS directory in /.zfs/snapshot/<snapshotname>, like this:

Restoring a file from an old snapshot

Or, if you really messed up, you can also completely roll back to an old snapshot (use with caution, as running programs may expect the disk contents to be different!): 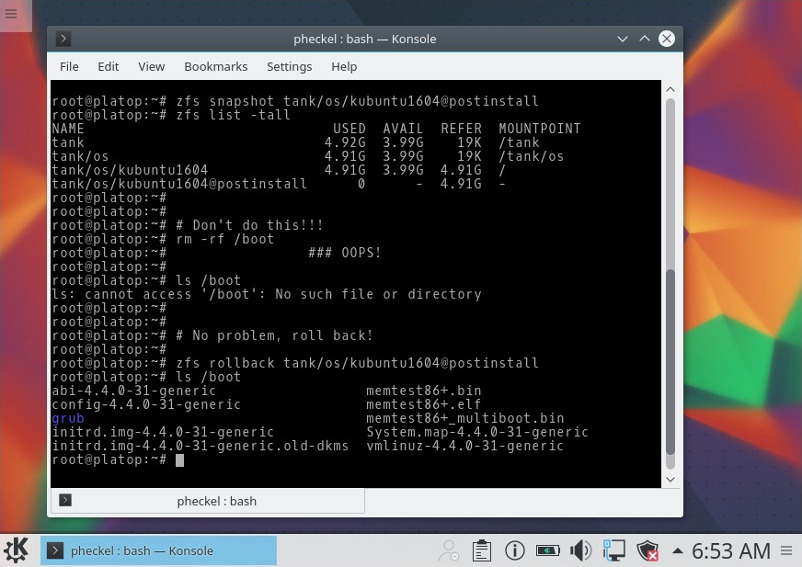