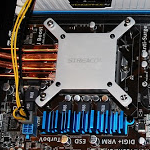 I recently built myself a new and shiny HTPC for my living room, and because it took lots of time researching the right components, I’d like to share my experiences. I published this post first on the XBMC forum a couple of days ago. Feel free to comment either here or there. Lots of pictures in the post!

Meet my first HTPC.
She’s a beauty.
And she doesn’t make a sound.

My requirements were clear from the beginning: I wanted an HTPC, but I also wanted to use it as my 24/7 Linux home server, with 2x big HDDs in a RAID1. Even though most people would say, go get and buy two devices — a Synology NAS and a nettop as HTPC — I wanted it all in one machine. And that made it all a little more complicated:

Because I wanted something that worked flawless on Linux, I couldn’t just take the best there is and that’s that. As a Linux user, you always have to check for drivers and compatibility. So I did. And I think I made a reasonably good choice here. Everything works, with some minor exceptions (more later).

These are the main parts I’ve chosen for my HTPC. I’m very happy with everything. No exceptions. Seems like I did good research before.

So why exactly these components? Here’s a bit about the why.

Keep in mind that you have to connect the components with each other, so don’t forget to order the right cables and adapters. I first forgot the slimline adapter for the optical drive — I’m sure you won’t :-)

If you don’t have these components/cables, you might want to buy them. SATA cables are typically included with the mainboard, an HDMI is necessary to connect the TV, and an optical audio cable is only necessary if you want to connect your audio receiver and not your TV.

Linux was a must as I said, so Ubuntu 12.10 was a no-brainer. I didn’t want to use XBMCbuntu or openElec, because I wanted to use the box not only as HTPC, but also as web server, NAS, scripting box, and so on.

I actually thought about going into details on how to set everything up here, but I didn’t fully write everything down yet. Maybe I’ll do that some other time. For now, a list of software and uses will have to do:

Even though the Intel VAAPI drivers are installed correctly, I cannot use VAAPI decoding in XBMC. It sometimes starts playing, sometimes it doesn’t even do that and just freezes completely. The logs show that it in fact does try to use VAAPI, but there are no error messages whatsoever when it freezes.

When I click the stop button on my remote control, XBMC completely freezes with the message in the logs “NOTICE: waiting for video thread to exit” (-> never happens).

HOWEVER, even though this is not cool, I am very confident that this is solvable.
–> MEANWHILE, XBMC works just as good (1080p movies + Aeon Nox) without any glitches

I had some other small issues that turned out to be easily fixed. Here are a few links to how I fixed them.

Power consumption and noise was a big deal right from the beginning. I chose each of the components based on what people and reviews said about their power consumption and their noise levels. Temperatures are rarely measured anywhere, but it goes hand in hand with the other two.

The machine idles at 29W, and goes up to about 55W when it’s under heavy load (using some tool, can’t remember the name).

There are certainly systems that consume less power, but considering that it has 2×3 TB HDDs and an Intel HD4000 chip, the power consumption is pretty awesome. Here’s how: A CPU that has a low TDP (55W TDP), low voltage 1.35V RAM, an SSD and a low power HDDs.

Here is what I calculated beforehand (mostly taken from reviews, and partly guessed). Unfortunately, I have no idea if that is near the actual numbers, but at least the idle power consumption is correct (table on the right).

The HDD idle temperate is around 47°C for the HDD that’s over the mainboard, 43°C for the other one. The temperature hardly ever changes — it definitely does not fluctuate as much as the CPU temperature. Under heavy load from copying, it can go up to 49-50°C.

Update March ’13: Occasionally, the CPU temperature goes over 60°C now, but only when XBMC idles in the menu at 60 frames per second. It never ever happens in other situations.

I also did a bit more stress testing. When using aircrack-ng to crack Wifi passwords, the temperature reaches about 66°C after 5 minutes of 100% load in all four cores, and even goes as high as 71°C after 15 minutes of uninterrupted stress testing.

After stopping the stress test, the CPU temperature immediately falls back to 55°C, and then slowly sinks back to 50°C after 5 minutes, and to 46°C after 10 minutes.

Let me say it like this: When I turn off my heater, and close the door to the kitchen (fridge noise), and when I’m closer than 1.5m, I can hear something — like the sound of the ocean in a seashell. In short: It’s completely silent. My GF fell asleep next to it multiple times.

How it all came together. Thanks to everyone who helped advising me!

A. Appendix: Lots of Pictures

Now to the part everyone first scrolls down to. The pictures. 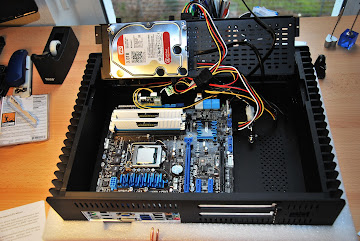 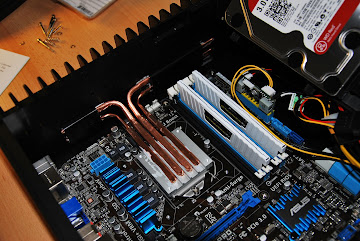 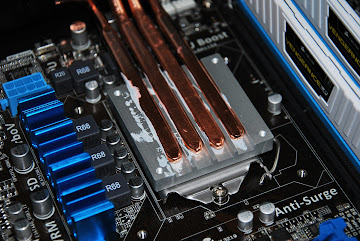 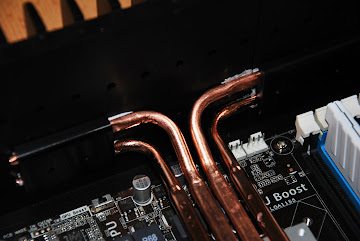 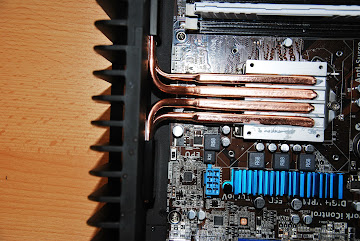 And the top view 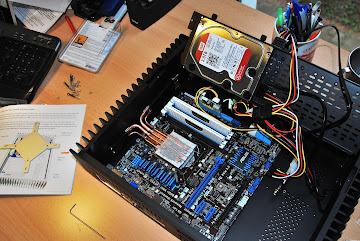 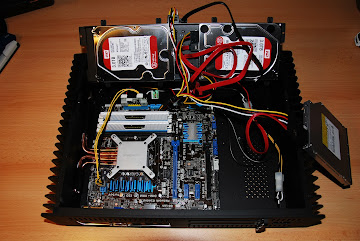 With the two HDDs and the heatpipes fully installed. All pictures from now on are actually about 10 days after I was using the machine with one HDD. 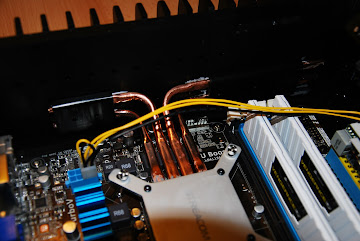 The CPU power connector cable is a bit short, but its long enough. It might get a bit warm because it’s squished between the RAM and the HDD. I don’t know if that’s bad for the cable … 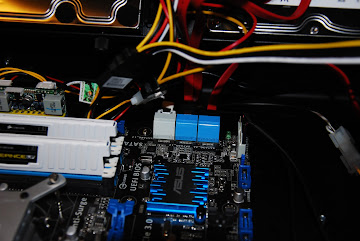 The SATA ports, lots of cables 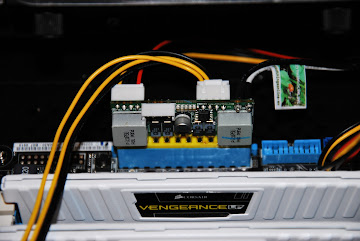 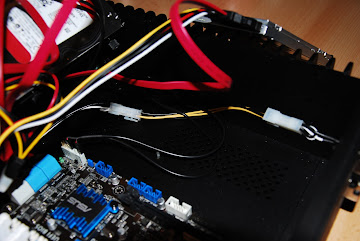 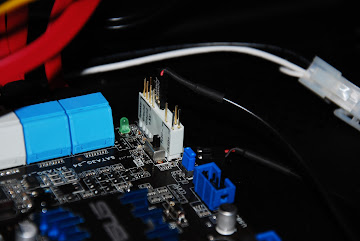 Power and LED pins: The mainboard power pins are not next to each other, so I wasn’t able to connect the power LED 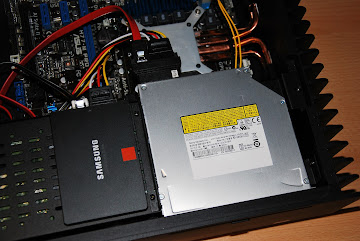 Top view on the Bluray drive and the SSD. There’s room for 2 more SSDs left to it. 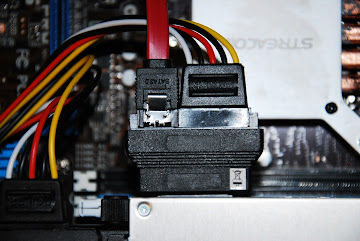 A SATA slim adapter is necessary to connect the Bluray drive 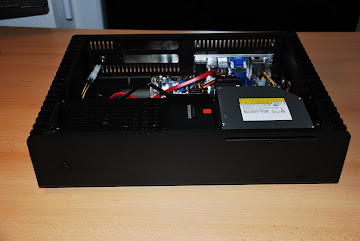